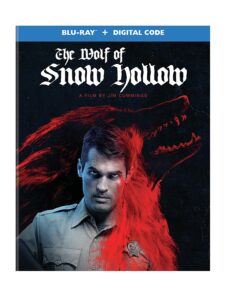 This movie should not be overlooked because of the horrible year it was released, that being 2020. First of, it’s the labor of love of one man: the writer, director, and star, Jim Cummings, and that type of effort always makes me happy. Second, it deals with one of the horror genre’s “big three” of monsters, and yet one that is still treated as the red-headed stepchild of fright fiction. I am, of course, talking about werewolves. Third, it is the last feature film of the late great Robert Forster, so it needs to be seen just for that. Fourth, while I have trouble calling it a horror comedy (as such films seem to be much more zany) it is equal parts scary and funny, and it excels in both regards. So grab your shoe shoes, don’t forget the silver bullets, and let’s track down The Wolf of Snow Hollow.

Snow Hollow is a small mountain town where women are being savagely killed by the light of each full moon. The viciousness of the deaths suggests an animal attack, but the perversity and cunning of the killer says it’s a psychopath. Maybe it’s both? Yes, soon the big, shaggy elephant in the room looks to be a real-life werewolf, but there are no such things as werewolves…right? That is the question and the problem faced by deputy John Marshall (Jim Cummings), and just in case that was a big enough problem, he’s also dealing with anger issues, alcoholism, caring for his ailing father (the sheriff of the town), and trying to raise a teenage daughter. So sure, no pressure.

The Wolf of Snow Hollow is a murder mystery, police procedural, horror, and comedy film all rolled into one, and despite that mixed bag approach, it has a coherent story with a surprising amount of heart. I like how our hero in this is deeply flawed, including being kind of a dick at times, but he still cares about his home and stopping the murderer. The effects are impressive, the comedy hits far more than it misses, and it even has an enjoyable mystery to be solved.

Let’s get to the special features on this new Blu-ray from Warner Brothers. While there’s not a whole lot here, this disc isn’t bare-bones either. There are four featurettes to be found here: one on the origin and idea behind the movie, and one on the driving force of the film, writer, director, and star Jim Cummings. Then there is a look at the story and the horror and werewolf genres, and lastly the design and look of the impressive werewolf in the movie. While there easily could have been more goodies on here, I am happy with what we got, so let’s move on.

The Wolf of Snow Hollow is a great and very fun film that is unique in its feel and resolution to the cops vs. psycho/monster formula. Jim Cummings does great work pulling triple duty here, and I can’t wait to see what he does next. As for this film, if you’re a werewolf fan, a mystery lover, or someone who likes very dark comedies, then I highly recommend this one. Get it when it comes out December 15th.