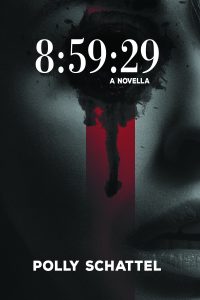 I first encountered Polly Schattel through her disturbing novel Shadowdays (reviewed here) —seriously, this book has stuck with me—and was delighted to see that she’s back with a new novella 8:59:29.

As with most reviews of novellas, I’m wary of giving too much away, but let me set up 8:59:29’s premise. Adjunct film professor Hetta Salter is in a precarious position. While she loves film, she’s stuck in a truly marginal professional existence teaching disinterested students just trying to fulfill general education requirements. She has one student who actually cares about film, Daryl Tanner, but he’s just unofficially auditing because he can’t afford to pay his tuition any more. Walter Hensley is Hetta’s department chair and chief tormentor—as a former academic myself I’ve encountered far too many Walter Henseleys in my life—and he’s all too willing to throw his weight around and lord it over Hetta. There have been complaints from the students about Hetta, you see. She’s not easy enough. She doesn’t respect them enough. So Hetta needs to make significant changes, including getting rid of Tanner, or her teaching contract won’t be renewed. She begins to realize that if only Hensley was out of the picture, her life would be a lot easier. To do this, Hetta and Tanner must make a film—a very unusual film—one that ultimately goes viral and “succeeds” beyond their wildest dreams. And boy is this dark.

Schattel has brilliantly captured the appallingly marginal existence of adjunct faculty, who are the bedrock of higher education in the United States. For those of you not already aware, it’s estimated that 70% of all college teachers are adjuncts, which means that they don’t have tenure, and never will, and they’re paid an average of $3000 per class that they teach. They are hired on short-term contracts, which might be renewed the following semester or they might not, depending on a lot of factors, including the whims of the Walter Henseleys of the world. The term “precariat” has been coined for folks like this; despite their dedication to teaching and their advanced degrees, they have almost no job security and receive just enough pay to scrape by. Most college students (and their parents) aren’t aware that their college professors might be so poorly paid that they’re on public assistance or are even homeless. This is what higher education in the United States looks like, though it’s almost never discussed. This is Hetta’s life.

Having read Schattel’s previous book Shadowdays, I should have been expecting an ending that packs a real wallop but…this one caught me by surprise. Wow. Polly Schattel is a very fine writer and I’ve added her to the (short) list of authors whose work I’ll read as soon as it’s published. 8:59:29 is a really interesting blending of the modern, the postmodern, and the premodern. Key elements of the novella hinge on the medieval, the 1980s when it seemed like anyone could rent a camcorder and make a zero-budget movie, and today, when almost anything can be found in the deepest bowels of the internet. If you’re a film buff I think you’ll especially enjoy this one.

This novella is a novel that has been boiled down to its essential core. It very much works at its current length, but I do wonder if 8:59:29 could have been expanded into novel length for added depth. Some additional detail on Hetta would have been delightful, and I’d have loved to see an extended look at her life as an adjunct under Hensley’s thumb. Be that as it may, 8:59:29 is highly concentrated horror and I really enjoyed it. Highly recommended, for the climax if nothing else.