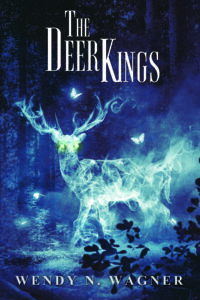 Reading books like The Deer Kings always makes me wish I grew up in a small town: one of those places where everyone knows everyone, and families have long histories there, and where strange things seem to happen behind closed doors. But when I think more about it, maybe I’m glad I didn’t come from a place like Kingston, Oregon, the stetting for Wendy N. Wagner’s The Deer Kings.

Gary Sheldon grew up in Kingston as an outsider and was always happy that he escaped the place thirty years previously. But now he’s forced to move back with his wife Kim, who is the high school’s new principal, and their son Zack, who has just joined the junior varsity football squad. Kingston—seemingly everyone in the town with the sole exception of Gary—is utterly obsessed with football and school spirit. The locals attend all the games and the players can do no wrong, even though it’s clear to Gary that many of them are little more than thugs and bullies. Gary slowly realizes that perhaps not much has changed in Kingston, and that his past has come back to haunt him. In fact, nothing in Kingston is normal or right or natural.

You see, in the summer of 1989, Gary and his friends did something that they later came to regret. In order to rid themselves of a dangerous bully, they created (or think they did, anyway) a patron saint that came to aid them in the form of a massive deer. They called on this entity for help several times, and each time, at some cost to Gary and his friends, the deer saint came to their aid. But now it seems that the deer saint is back, and things are much, much worse than they had imagined.

This is horror that unfurls across the decades; indeed, there’s an element of horror here that no doubt goes back many decades, but The Deer Kings focuses on two periods in the protagonists lives: the late 1980s, when they were outsider teenagers, and then again thirty years later after they have grown up and had lives outside of Kingston but have found themselves drawn back to the town they grew up in but never expected to revisit. This is folk horror at its finest: horror that deals with small town obsessions and how intertwined with the local environment and nature it all is. All too often, folk horror seems to be set in the English countryside, or a small island off the coast of Scotland or Wales, but not so here. This is folk horror in small-town America in the Pacific Northwest and it’s incredibly effective.

Wagner is an excellent writer who has really brought a startling and subtle creepy locale to life. On the surface, Kingston is a normal place like thousands of other small towns. It’s only when you begin peeling back the surface that you can see just how strange the locals are. Characterization, pacing, action, and horror elements are all top-notch and the two time periods covered in the novel are woven together seamlessly. That’s not easily done, but Wagner has managed it well. I really enjoyed The Deer Kings and think that it’s a uniquely American take on the idea of folk horror. Highly recommended.