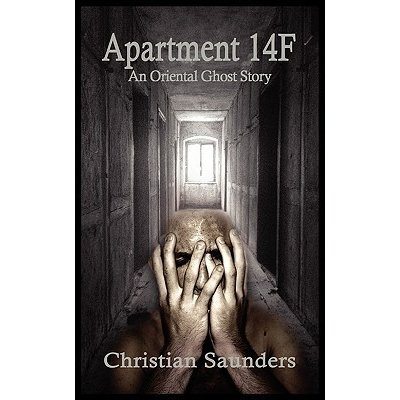 Jerry has taken a job as an English teacher in Beijing, China. It is pretty much everything he wanted and expected except for one thing. His apartment is haunted.

Apartment 14F: An Oriental Ghost Story is, in a way, an old-fashioned horror story that builds up slowly and ends with a shock. No fancy word plays and no secret message. It entertains by its sparse and direct storytelling. It is a refreshingly straight-ahead ghost story. C. M. Saunders spent time in China so he is able to portray the area quite accurately and catches a lots of the nuances of both Chinese culture and the traveler’s struggle with an unfamiliar environment. The perspective of the narrative is mainly through Jerry but the ghost story feels quite Chinese in many ways. It has many of those little details that show up in Chinese ghost tales; strange hair in the sink, moaning ladies, apparitions in your dreams and in your bed, flickering lights, and a few others. These should be familiar to anyone familiar with Asian horror films or literature, especially that of China, and the author incorporates them well. We also have the Chinese sidekick who helps Jerry understand what is going on, a blind fortune teller who “reads” palms in a very weird way, and the ubiquitous apartment employee that has seen and heard it all. The importance of the numbers 14F, which I am assuming is accurate in the way the author describes it, was also fascinating to me. Throughout it all, there is a nice build-up of eerie events that lead into the surprising climax. It is a quick read but one that will stay with you… perhaps even in your dreams.

This is a revised version of Saunders’ story that was originally published in 2009. He includes an essay titled “Inside Apartment 14F” that explains the creation and evolution of his story as well as adding a mildly cautionary tale about editors and publishers. Also included is a work of short fiction titled “Little Dead Girl.” It is a much shorter ghost tale which is quite good but suffers from the inclusion in this book due to the similarities to the main event. But if seen as icing on the cake, it becomes a nice exclamation point to the very entertaining Apartment 14F and the essay that followed. Overall, a good read and a recommended one for those who like fiction about ghosts and China.