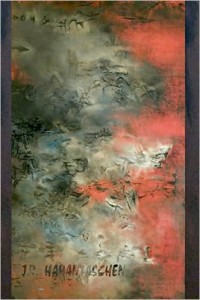 With a Voice that is Often Still Confused But is Becoming Ever Louder and Clearer
J.R. Hamantaschen
West Pigeon Press
September 9, 2015
Reviewed by Elaine Pascale

Hamantaschen is a wonderful writer. And I am not saying this simply because one of the stories in With a Voice… contains an author who kills a Goodreads reviewer (a story titled “Soon Enough This Will Essentially Be a True Story”), nor am I saying this because this particular author knows my home address since he mailed me a copy of his book. I am saying this because he really is a very skilled writer.

A large part of the skill is related to the fact that the supernatural elements are handled in such a way that a reader doesn’t question them. The stories in this collection revolve around ordinary people holding ordinary jobs and doing things that most of us do every day. Then, there is a very bizarre twist, but Hamantaschen (and I am not going to make fun of his name or complain about having to type it like other reviewers) deftly weaves the twist into the ordinary in such a way that it feels very…at home.

There is a strong Lovecraft influence to the writing; I was also reminded of Clive Barker (the early years). My favorite stories from this collection include “The Gulf of Responsibility,” “I’m a good person, I mean well and I deserve better,” and “It’s not the feelings of anxiety; It’s one constant feeling: anxiety.” I also really enjoyed the story I mentioned earlier (“Soon Enough…”) and it completely creeped me out. “Soon Enough…” was a nice tip of the hat to conventional horror, sandwiched in the middle of dark fantasy.

When I get a break from other projects, I am going to read Hamantaschen’s first collection, You Shall Never Know Security. He has piqued my interest and I hope to read more from him beyond the two collections. I recommend this With a Voice… without hesitation.