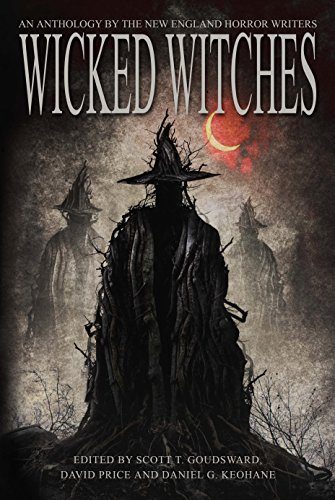 While the weather and prohibitive cost of living make life in New England a daily struggle, there are a few indigenous gems: Wellfleet Oysters, The Patriots, and New England Horror Writers (NEHW). The latter—a group of extraordinary writers and truly wonderful human beings, has recently released its latest anthology: Wicked Witches. The cover, illustrated by Mikio Murakami, is designed to stand apart from the pack and to match the quality of work within.

While enjoying the anthology as a whole, here are the favorites:

Catherine Grant’s “White Witch:” If Ryan Murphy had known what he was doing (and he rarely does), he would have hired Grant to write for American Horror Story: Coven. This story is heartbreaking and thoughtful, with sympathetic characters and a vivid historical setting within the world of Haitian Voodoo. The story applies the redemptive edit to the famous White Witch of Rose Hall, Annie Palmer, perhaps finally putting her duppy to rest.

Paul McMahon’s “Baskets:” Grandma Shawl, the haggish hoarder, has many, many baskets, and her grandson, Tommy, has enough rage to fill all of them. Is there a connection between the two? While the plot is supernatural, the distrust and hostility between family members is very realistic.

K.H. Vaughan’s “Run in the Widow’s Hell:” Anyone who has spent any time in Appalachia knows of the nearly hallowed spookiness and the belief in superstition that borders on religious. Vaughan has captured that feeling, along with the sing-song dialect of the inhabitants. The setting is so vivid in the story, that I had to keep reminding myself that I have never driven through Widow’s Hell.

Peter N. Dudar’s “Portrait of an Old Woman with Crows:” A young mother’s conflict over self-improvement is met with the type of dark magic that Wiccans dread. As a parent, there is nothing more upsetting than believing that you brought harm to your family, and Dudar frames the paranormal within that construct of guilt. This story gives new meaning to a “murder of crows,” and is creepy enough to make you avoid people in the park.

Finally, Rob Smales lured me into fandom with his offering from NEHW’s Wicked Seasons anthology, and he has entranced me yet again. “Moving House” is an entertaining read about the newest member of Crystal Street: Barbara Yeager. Say her name quickly with the New England accent and you just might figure out who she really is. While fulling admitting that I am walking into a pun, Smales’s writing is magical. There is humor where humor is needed and plenty of fright.

Wicked Witches is another delightful and eclectic anthology from NEHW!