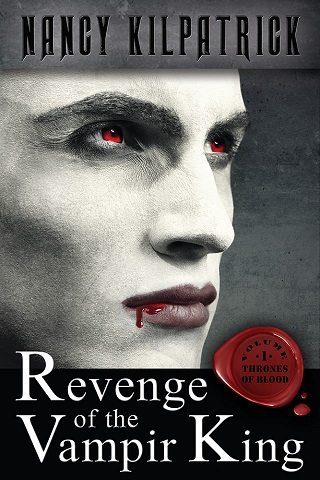 She has done it again: Nancy Kilpatrick has added yet another interesting twist to the vampire tale. I am a vampire purist, so I was thrilled that Kilpatrick’s vampires were of the sanguinary variety. What I didn’t expect, but fully enjoyed, was that the humans (Sapiens) in the story were equally, if not more, ferocious.

Revenge of the Vampir King focuses on its eponymous Moarte, the handsome and capable king who had recently been held captive and tortured by the Sapiens. The most traumatic afflictions came at the hands of Princess Valada. After a raid on the Sapiens, a gift is given to Moarte by the Sapiens King: his captive daughter, Valada. This happens within the first few pages of the book, and, at this point, I was hooked. I quickly became enthralled with this dark and devious world, and wanted to see the role reversal play out between Moarte and Valada.

While the Sapiens seem to lack a moral compass and the Vampirii exude a certain warrior nobility, the characters created by Kilpatrick are fully developed and not entirely black and white. My favorites came down to a pair of siblings. On the Vampir side, there are the twins Hemlock and Wolfsbane. Hemlock is a sadistic, status-climbing, corrupt vampire and she is simply cold, cold, cold. She lacks empathy and is sexually satisfied by the pain of others. Her counter-part, Wolfsbane, contains all of the empathy that she lacks (perhaps there was some sort of exchange within the womb–he got all of the kindness, she all of the cruelty). Wolfsbane is that dreamy, righteous warrior that fantasies are made of. On the Sapiens side there is the slave, Serene, and her brother Rivard. Serene is strong and smart and highly ethical, while Rivard is honorable, yet broken. Kilpatrick did a stunning job of having these supporting characters add great richness to the plot.

Which brings me to the main characters, Moarte and Valada. They are just plain sexy (and they have some graphic encounters–this book is meant for mature readers only). After suffering through the Twilight years, it was refreshing to have a vampire/human relationship in which both participants are equally complicit, equally enamored, and equally frightened of the power the other holds over him/her. Valada is no damsel in distress and Moarte is no savior. They initially hate and despise each other, and it is a long road to trust. I am greatly looking forward to the sequel to see how their relationship continues to evolve.

I highly recommend Revenge of the Vampir King. It is an engaging read, full of action and sizzling passion. Hopefully Book 2 will be available soon!