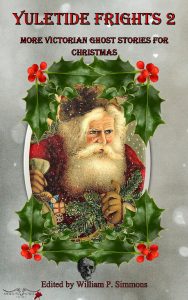 A new anthology of Victorian Christmas ghost stories to haunt your holidays.

Not all Christmas visitors are jolly…or alive.

While the holidays evoke warm memories of carols, decorations, and gift-giving, horror lurks beneath the holly. The Victorians sought a pleasing terror each December 24th, relishing tales of spirits, goblins, and demons. Shadow House Publishing is proud to continue this tradition with YULETIDE FRIGHTS 2: MORE VICTORIAN GHOST STORIES FOR CHRISTMAS. Bestselling author and anthologist William P. Simmons exhumes fifteen tales that capture the fright and macabre merriment of the season.

Winter Solstice. Yuletide. Christmas. The holidays are filled with both shivers and glad tidings, harkening us back to a time when the sun died, and the powers of darkness held sway. Gather ‘round the fire and unwrap some of the greatest ghost stories in the English language. Unearthed from moldering Victorian magazines and crumbling newsprint, many of these tales haven’t been reprinted for over a century and include spine tingling classics alongside little known rarities by B.M. Croker, Florence Marryat, Ernest R. Suffling, Margaret Oliphant, and many more.

Resurrect a terrifying tradition this holiday season. Enjoy ghost stories as entertaining now as when first published. Roast some chestnuts, lock the doors, and spend the night with the spirits of Christmas past.

Available as a Kindle and trade paperback from Amazon.

William P. Simmons is a critically acclaimed Amazon bestselling author of four collections and editor of eight anthologies. Specializing in supernatural horror, his work has been published in several magazines and anthologies. He has been featured in Publisher’s Weekly, Rue Morgue, Dark Discoveries, and others. An active HWA member, his fiction and poetry has received eight Honorable Mentions in THE YEAR’S BEST FANTASY & HORROR series, and has been praised by Adam Nevill, Kealan Patrick Burke, Graham Masterton, and T.M. Wright. Simmons is also a critic, reviewer and journalist, having spoken with such authors as Richard Matheson, Jack Ketchum, and Ramsey Campbell. He feeds the dark so that it won’t take even more from him.