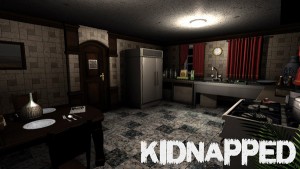 I don’t know about you guys but being kidnapped is not my idea of a good time, especially when it involves some dank-ass cellar, demon marionette baby things and a buff man in a diaper.

But let’s not get ahead of ourselves.

Kidnapped is a first-person survival horror game where you take the controls as Sebastian Lee, a man who wakes up in the above mentioned dank-ass cellar with no recollection of how he got there. Your objective throughout the games’ five chapters is to collect certain objects and solve the mystery of who kidnapped you and why, all while trying to make your escape.

Now, I will admit I did jump a few times (which will happen when you have the volume cranked on your headphones) but aside from that handful of moments, this game failed to impress. It could be because the graphics were nothing special, it could be because the story was nothing new, but it was probably because Kidnapped is simply missing the tension that makes those outstanding horror games terrifying. There’s only so far you can take the music and the layout and the jumpscares before the player starts losing interest.

Gameplay is simple enough – all you need is your mouse and your WASD keys to wander around. You collect objects throughout the game, some of which show up in your inventory and appear to have no use whatsoever, and some that you can pick up just to drop them on the ground.

The buff man in a diaper (I suppose you could call him one of the bosses) stalks you in the halls of the mansion in chapter one but shows up behind you literally without warning, giving you zero time to defend yourself. You’re exploring a room one minute and the next a royalty-free scream soundbite rings in your ears and then you’re dead. I only got a good look at his pixilated physique a good ways into the game, and by that time I had been killed by him a handful of times.

After you escape the mansion in chapter one, you then find yourself in chapter two (titled, “A Dark Decent.” I can only imagine the game creators meant, “A Dark Descent,” but I digress.). You’re now under the mansion wandering through caves where the next of the supposed bosses lurks. These are the demon marionette baby things and they click and clack towards you until you bury a few bullets in them. And when they die, they sound like bald eagles.

Chapter three brings you outside into the woods where the tension has completely disappeared and now your objective is to kill and skin animals because your character suddenly comes to the conclusion that a multi-animal sacrifice is the only way to escape. Right. If I wanted to go around killing animals, I’d play Big Buck Hunter.

By this point in the game, nothing appears to be chasing you. The demon marionette baby things are long gone and the diapered man is probably changing himself. So you just wander around the woods, looking for animals to kill until you complete that task and move on to the next chapter.

This eventually leads up to the incredibly lackluster finish which is over in the blink of an eye and where nothing is truly resolved. You’re left with a quick voiceover trying to wrap the story up (the voiceover pops up from time to time during the game to let you know what exactly is going on) and even then, the story doesn’t feel complete.

All in all, Kidnapped fell a little short for me. Its Steam page describes it as a “psychological story-driven horror game, featuring emphasis on exploration, puzzle solving and combat,” and I can certainly get behind the exploration and puzzle solving, but this is not a game that’s combat-heavy. Check it out if you want a game that you can finish in a few hours and if you like being chased by grown men in diapers.