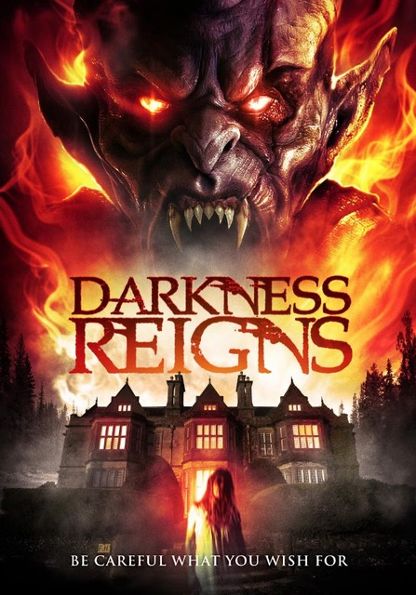 In Darkness Reigns, Daniel – once a nobody in the movie industry – depressingly arrives at the premier of his popular movie Defanitus Soul. The monologue sets the pace, letting you know he’s not relishing the idea, though he should be. He’s famous! Darkness Reigns shares the one-time experience of an entire film crew and cast when they encounter a vile demon who welcomes and devours every soul. Upon request!

There is something to say about a movie that practically decimates the entire movie’s cast within minutes of beginning. When I saw Casper Van Dien’s face in the trailer I got excited; I loved him in Starship Troopers (an all-time favorite). But to see what happened to him – whoa! I cracked up in both surprise and laughter! Who kills off the biggest star in their movie like that? I wonder if the gig was a favor to a friend or something?

Darkness Reigns isn’t one of those films you’ll stash in your horror collection to watch once or twice a month. It’s really not that good, but the premise was cool. As you watch, you try to dig beneath the mass killing, to figure out the plot. But you don’t until you’re told. You never see the punch coming, at least I didn’t. I think that’s why I enjoyed it.

The movie’s slow and the acting, excluding Van Dien’s was okay. Now the special effects were pretty cool. The mirrors, the intestines (no spoilers, sorry), and especially the first attack are killer. I also found great appreciation in there being no mood music. Not one time did an ominous tune play, warning you of impending doom. To me, that makes a horror movie real. I can’t brag about much else, sadly.

I have to admit, though it drags, Darkness Reigns is entertaining enough to at least view once. Check it out anywhere video can be rented.