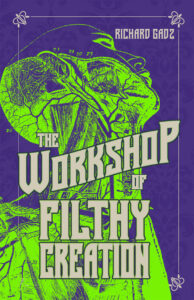 What a brilliant novel. Set in Victorian London, this is the story of Maria, a strange young woman brought to the city by Professor George Hobson, who brought Maria to London with him after rescuing her from the laboratory of the sinister Dr. Wilhelm von Frakken. Maria is…not exactly human. She is von Frakken’s creation, and, he believes, his property to dispose of as he wishes. And now that von Frakken has been hideously injured, he needs Maria’s body very badly, and will do whatever it takes to get her back.

The setting takes Mary Shelley’s Frankenstein as a starting point, but it soon becomes clear that her novel got many of the essential facts wrong. Wilhelm von Frakken is far more capable a scientist than the fictional Victor Frankenstein, and unlike Frankenstein who eventually regrets meddling with nature, von Frakken believes that human flesh is his plaything.

Maria is a fascinating creature (or person), though her origin is entirely artificial. She seems to have been crafted using a mixture of reanimated corpse flesh and Dr. von Frakken’s mad science. Her appearance is unnatural, though not hideous; it seems to have more of an “uncanny valley” effect on the viewer, a notion that something isn’t quite right, or fully human, about the poor woman. She heals quickly, and physically she is a near-superhuman specimen. She is also the most physically- and action-oriented of those who oppose Dr. von Frakken and the Promethean Society, a cabal of physicians interested in ruthlessly pushing the bounds of medical science. Maria is aided by a handful of men who oppose von Frakken’s plans: George Hobson, once a captive of von Frakken and the cause of his injuries, and two of Hobson’s friends, Dr. Thomas Meers and police inspector Barré.

The villains of the piece are as engaging if not more so than the protagonists. Wilhelm von Frakken is an utterly unscrupulous mad scientist, obsessed with both immortality and the power this would bring him. He is also brilliant and perhaps the finest medical and scientific mind of the Victorian Age. He is aided by several members of the Promethean League, Drs. James Clements and Leonard Polidori, amoral though brilliant physicians, who are not quite in von Frakken’s league, as well as the failing industrialist Jabez Pell, who becomes von Frakken’s pawn.

I’d love to see a kind of Victorian biopunk sequel set in the world of The Workshop of Filthy Creation in which von Frakken’s techniques become more widely known and begin transforming society. In any case, I’d love to see a sequel because Gadz is a gifted writer.

Such an impressive book. The novel’s premise is highly engaging and the plot moves along at a brisk pace. Yes, this really is one of those stereotypical books I didn’t want to put down. The characters are both fun and just realistic enough to satisfy without getting in the way of the novel’s touches of Gothic melodrama, gruesome body horror, and the madcap chases and hunt across Victorian London for a young woman who doesn’t want to have her body turned into spare parts for a madman.