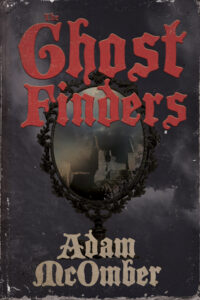 I’ve always been a sucker for occult detective stories, and Edwardian London is a perfect setting for occult mysteries, so The Ghost Finders seemed like a natural fit for my interests. But The Ghost Finders is no mere paint-by-numbers late Victorian thriller with occult overtones—McOmber has crafted a fascinating plot and set of characters who are true originals, and I very much want to see these characters in future novels.

The protagonists of The Ghost Finders are what make the story work. The members of Coxton & Co., a small firm of detectives specializing in outré cases, are: Henry Coxton, a genteel but capable young detective, who has a deep secret that torments him; Violet Asquith is a fiery and independent woman who happens to be a powerful telekinetic; Christopher X is a hulking man who wears a sack over to head to cover what is said to be burns but he is far, far more than the simpleton he sometimes appears to be; and Mrs. Hastur, their housekeeper, who is no simple servant—she plays a relatively minor role, but was, oddly, perhaps the most intriguing character in the novel. There’s a sense of real history here among the protagonists, expressed through both their interactions and the detailing of some of their past cases, as well as a genuine sense of friendship, though their relationships are sorely tested in the course of the novel.

We get to see Coxton & Co. in a variety of situations, offering a kind of overview of the variety of cases they normally tackle, beginning with simple hauntings and the like. The novel culminates when they run afoul of what is essentially a cult, led by its New Lord, a powerful occultist who has emerged on the scene with deep connections to our friends. The stakes here are high: it becomes clear that the New Lord has much larger designs than simply running a backwoods cult, and he poses a truly existential threat to each of the members of Coxton & Co. The novel’s ending sets us up nicely for a return to these characters and the opportunity to learn more about each of them. While all the members of Coxton & Co. get a nice arc in the course of the novel, there are definitely more depths to be plumbed for each. And what’s more is that I actually want to know much more about them. McOmber’s strengths clearly lie in developing fascinating plots, but I think beyond even that is his ability to present fully realized characters with backstories, hopes, fears, goals, and interactions with other characters that genuinely matter. That’s sadly all too rare in fiction, so I specially want to note McOmber’s facility with characterization.

I should also note that this isn’t just a world featuring genteel séances and the occasional bothersome ghost haunting a manor house—the world of The Ghost Finders is one that hints at a much broader cosmology. We get a few answers on what the universe of The Ghost Hunters is all about, but this is fundamentally a world of cosmic horror and otherworldly entities. There’s a lot to enjoy here, but I dearly want to learn more.

The Ghost Finders was lots of fun. Highly recommended for fans of occult detective fiction. Viewers of the often overlooked television show Penny Dreadful would find The Ghost Finders especially entertaining, as would those looking to add some cosmic horror to their reading list.