Book Review: THE GATHERING OF SHADOWS 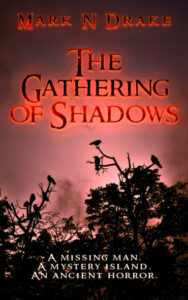 Following closely on the heels of Mark N. Drake’s inaugural story collection, Hobb’s Top and Other Horrors, The Gathering of Shadows is a Lovecraftian novel set on a (fictional) British island in the 1920s. As with the initial collection, this one takes places mostly on Darkisle, a backward and insular place that is not especially welcoming of outsiders. What follows is a fascinating, detailed investigation as a private eye travels to Darkisle seeking a missing man and becomes embroiled in a plot by mobsters and cultists.

The Gathering of Shadows starts off as a classic detective novel, featuring former cop and veteran of the Great War, Jack Glennison, who is hired to find a woman’s missing husband. He tracks the man to the mysterious island of Darkisle, before eventually realizing (1) the woman who hired him is not the man’s wife, (2) the missing man has been involved in some pretty shady dealings with American mobsters, and (3) the supernatural is real. Jack and the woman who hired him end up teaming up and travel to a remote mansion, also on Darkisle, for an antiquarian book auction, with several suspected cultists in attendance. I don’t want to spoil the resolution of the climactic auction, but I will say that not all of the attendees are pleased about the outcome. Things get especially interesting after everyone is trapped at the house for a couple days because of a collapsed bridge; several parties will do whatever it takes to secure the grimoire they seek. By the end Glennison’s eyes are opened to the existence of several dark plots by secret societies attempting to bring about the end of the world.

There’s a lot to enjoy here. This is one of the few occult detective novels I can recall that feels like an actual investigation—Glennison is daring but methodical, and takes the reader along with him as he tries to figure out what’s really going on. The supernatural elements that we see—and I hope for more in the next volume—are very well done. The spells in The Gathering of Shadows remind me of Harry Connolly’s Twenty Palaces series: magic here is alien, dangerous, and disconcerting, even when it works exactly as intended. The setting is decidedly Lovecraftian, with appearances by some tomes and beings that will be familiar to readers of the Cthulhu Mythos. The tone is just right, I think: dark and hardboiled, but not overly saturated with world-weary cynicism, which can grow old quickly.

With The Gathering of Shadows, Mark N. Drake has crafted the start of what I hope will be a series that will continue to explore Lovecraftian horror in the 1920s. He’s assembled all the elements needed: a great set of characters, including his lead, Jack Glennison; the terrifically ominous setting of Darkisle (I’m certain we haven’t plumbed the depths of that benighted island); and a set of global or even cosmic conspiracies and secret societies that he has only begun to explore. I’m looking forward to Jack Glennison’s next case! Definitely recommended.