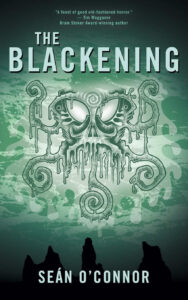 Irish author Sean O’Connor blew me away with his last novel—the destined-to-be-horror classic WEEPING SEASON. He had much to live up to with his newest release, THE BLACKENING, and I am pleased to state that he brought out a classic monster story of a novel that harkens both to great summer reads as well as something a bit Lovecraftian.

A young couple goes exploring a cave off of a beach in Vik, Iceland, where bad things are about to occur. It wasn’t supposed to happen this way. Ben had brought his girlfriend Alison all the way from Belfast to surprise her with a proposal, but he never gets there. Allison is quite curious about the cave they found and the little black lump that she found inside it. Liquid limbs suddenly shoot out of the little black lump and grab Alison. Before Ben knows it, the blob-like thing has dragged her deeper into the cave, and out of reach for any attempted rescue.

Ben runs into the local police department to report his missing girlfriend and what he witnessed, but comes off as a lunatic and possible suspect in this disappearance. Police Inspector John Ward, himself a former Irish citizen, is not eager to get too involved. To say he was a bit depressive would be a gross understatement. At what he sees as being the end of a futile life and police career, Ward was willing to throw his life away before this latest case fell in his lap.

Exploring the cave begins once Ward calls in a pair of scientists from the local university. The samples they take show a creature possibly not of this earth, with the ability to change shapes and grow. Oh, and it also has a penchant for absorbing women. Once Ward and his scientist pals get a better sense of the horror that is inside this cave, the next move is like a scene out of Peter Benchley’s JAWS. Ward pleads with the local police commissioner to close down the town and beach area, during a time when tourism is at a high, until they can destroy this blob. The P.C. doesn’t go for it and very soon our indefinable cave creature is going to have quite a buffet to feast upon.

THE BLACKENING starts with a depiction of horror and never looks back. Things get completely wild by the end, and it truly pays homage to the great H.P. Lovecraft. Sean O’Connor knows his horror history and how to write a really scary story. He is a shining star in the world of horror fiction and I recommend you get on this train now before he explodes into the global sensation he deserves to be.