Book Review: THE BEST OF BOTH WORLDS 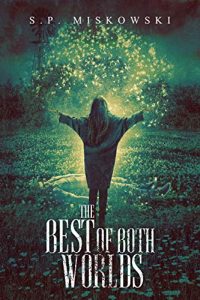 The Best of Both Worlds
S.P. Miskowski
Trepidatio Publishing
May 1, 2020
Reviewed by Elaine Pascale

The Best of Both Worlds is a sequel to The Worst is Yet to Come in the sense that the plot runs parallel and the characters’ story arcs intersect in subtle yet important ways. The Best of Both Worlds helps to explore the themes of its predecessor while introducing two new characters: Roland and Pigeon. The title of this book might refer to the intersection of characters: the world of Tasha and Briar from The Worst is Yet to Come running alongside and colliding with the world of Roland and Pigeon. Or it may refer to Roland and Pigeon themselves: a brother/sister team who view their world through an “us vs them” lens, crafted from years of abuse and viewing others with basic dislike and distrust.

The writing in this book is very dream-like, including segues into actual dreams. The dreams are written in italics, so it is not difficult to determine where the real story begins and ends.

As in The Worst is Yet to Come, the rules of magic remain unclear. Pigeon is able to communicate with the dead and also to communicate/conjure images of living people when needed. She does not seem to be a witch; witches are beings who, by the reactions of other characters, seem to have malevolent intent. I could not tell if the spirits/ghosts from The Worst is Yet to Come were making appearances here, or if some other forces were at work. The advent of the mysterious cottonwood is noted, yet still not explained.

While creepier than the prior book, The Best of Both Worlds ends again with a cliffhanger, unresolved conflict, and unexplained plot twists.  I read both books in order, but I believe it would be possible for a reader to read The Best of Both Worlds first, or to read each as a standalone. I am hoping for another story in which all four characters combine. Due to the popularity of trilogies, I would not be surprised by a follow up from Miskowski.