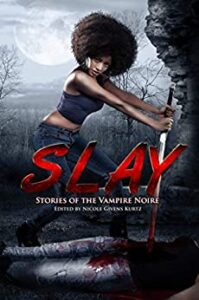 Slay: Stories of the Vampire Noire is a unique collection of international vampire stories with a focus on Black characters as either the main vampires or vampire hunters. According to the forward, the purpose of the book is “to showcase Black vampires, slayers, and hunters’ stories to readers. We came to SLAY the popular European trope.” Slay achieves its purpose and also includes many feminist vampire tales. Some of the stories felt like either extensions of the Blade/Underworld series or contemporary re-tellings of the martial arts/action “Blacksploitation” films of the 1970s and this became a bit repetitive. Perhaps fewer stories in the collection would have produced more diverse results.

The cover art by Taria Reed sets the tone for the stories inside. There is an overarching theme of power and dominance. The table of contents is arranged by stories from the United States and Britain, Africa, and The Future. Sprinkled within are obituaries of people who fell ill after an encounter with a night visit from a traveler.

Desiccant by Craig Laurance Gidney: Tituba is transgender, which has informed some of her choices and much of her distrust. She finds that recently she is tired all the time. She is in a new apartment and wakes to red dust covering everything. She assumes the dust is tied into her fatigue, but she has no idea of its origin. The story has no conclusive ending, which was a bit of a disappointment, but I really enjoyed the characters.

The Retiree by Steven Van Patten: Gideon was once an incredibly impressive man, both physically and mentally. He has been reduced to being sent to an elderly home by his estranged daughter, Mona. The reader finds out that Gideon is not the harmless retiree he appears to be, nor is he as cold and bitter as originally believed. I found this story to be extremely touching.

A Clink of Crystal Glasses Heard by LH Moore: Monthly cycles mean more to Neeka and her friends than most. They are a form of both intrigue and embarrassment, but they are also the making of a blood sisterhood. This offering felt like the opening chapter to a longer coming of age story—one that I would very much like to read.

Diary of a Mad Black Vampire by Dicey Grenor: Ashanti is bored with eternal life until she is captivated by spoiled and reckless Tetra. I was a reluctant reader of this story as I have read too many journal/diary narratives, but this was handled well with craftily sprinkled red flags that make the story fun to follow.

Encounters by K.R.S. McEntire: Lyric’s husband had been dead for twenty years when she saw him at the airport. They end up boarding the same flight: a flight that is taking her to marry another man. There are plenty more twists and turns in this imaginative yet relatable plot.

Frostbite by Delizhia D. Jenkins: Skai wakes up in a cabinet in the morgue. She mentally retraces her steps, remembering her final moments and uncovering more family secrets than a crypt can hold.

Ujima by Alledria Hurt: I enjoyed the description of the midnight market where people are either vampires or food (labeled “cows”).  There is a theme in many stories about the commodification of people for the use of vampires and this one elegantly alluded to many of the issues around the meat farm industry.

Attack on University of Lagos, Law Faculty by Oghenechovwe Donald Ekpeki: Plot-wise, this story was average, but it had an excellent hook, voice, and charismatic yet narcissistic narrator.

Quadrille by Colin Cloud Dance:  The old joke goes, what happens when a vampire, a djinn, and a shapeshifter walk into a bar? This story is about expanses far beyond bars and the relationship between three unlikely travelers. The take on the vampire is unusual as he uses saliva to sedate before drinking. The entire story is written like dance moves which added to my interest.

In Egypt’s Shadows by Vonnie Winslow Crist: Akhon always loved Kebi. He loves her enough to watch her live, age, and die while he remains immortal. He then watches generations of lookalike descendants. The “love never dies” theme is strong in this story and creates a poignant read.

Message in a Vessel by V.G. Harrison: This story provides a dystopian vision of the future which includes human food farms. Despite the slavery-like treatment of humans, compassion for them from certain vampires still exists.

There is an intentionality to this anthology that is impressive. There has always been a gap in the voices and perspectives around vampire stories and Slay fully compensates in meeting that need. If you enjoy vampire stories, Slay will not only entertain you, it will make you revisit past notions about the monster.