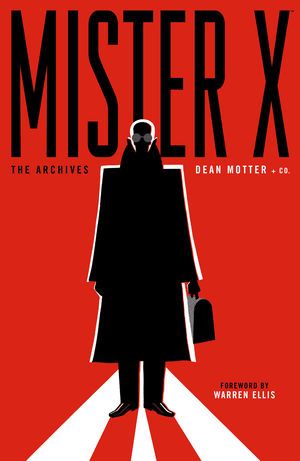 This hefty volume collects Issues 1 through 14 of the Vortex Mister X comic-book series, and “Heartsprings & Watchstops” from Issue 1 of the Atomeka comic-book series A-1. “In the days when the popular arts were just starting to get to grips with postmodernism,” recalls Warren Ellis in his Foreword, “Mister X presented a fable of the postmodern condition: a detoured Ayn Rand hero, an architect who dropped out and allowed his vision of the perfect city to be bastardized returns as a wreck of a man to try and fix it.”

The enigmatic Mister X, who must force himself (aided by the drug Insomnalin) never to succumb to sleep, vows to restore Radiant City to its original noirish grandeur. X claims to be one of its architects, but can he survive his own nightmarish condition and guilt over inventing Psychetecture, responsible for driving large numbers of residents mad? If the fights against relentless toughs don’t kill him, will the buildings and their mood-altering capabilities render him a raving neurotic?

With nods to historical design styles known as Brutalist, Bauhaus, and even German eExpressionism, the artists of the Mister X series were—and are still—hugely influential; the Hernandez brothers and Seth going on to create, respectively, Love and Rockets and Palookaville.

The alchemical mix of stunning art, and stories by Rob Eggleton, Neil Gaiman, Dave McKean, and Bill Sienkiewicz make Mister X: The Archives itself a stand-alone work of art.