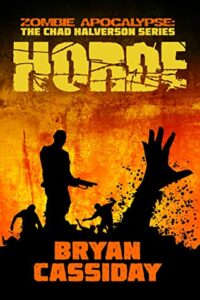 Horde is book 6 of the Zombie Apocalypse: Chad Halverson Series. While I am not familiar with the first five books, the setting was ominously recognizable. The story included people quarantining and practicing social distancing from a virus, masks were both worn and scorned, some people were accused of being asymptomatic spreaders, and others argued about how the “plague” was truly spread—through direct contact or through airborne spores.

The book begins with a lost and haggard man who is rescued from the desert by others on their way to a compound. The man has amnesia and is given the name “John Box.” As I hadn’t read the other books in the series, I was just as perplexed as Box about his true identity, and that helped to infuse additional tension into the plot. I have to wonder if readers of books 1-5 would find the focus on Box not knowing his true identity to be a bit anti-climactic.

While Box does not remember who he is, he remembers things about military history and guns and CQB (close quarters battle). He also has a recurring dream of a woman who he cannot place.

In the compound, he begins to get to know another recent arrival, Marta, and one of the men who rescued him, Porter. In a short while, the psychopathic Zodiac arrives with his squad, and they take control of the compound. Zodiac is an extreme tyrant, killing people for no reason and wielding his machete menacingly, referring to himself as “the Reaper.” Zodiac hates hippies, the government, drugs, and basically anyone who isn’t Zodiac. To further divide the camp, he takes a dangerous dislike to Porter, Marta, and Box.

There are some very nice visual moments that would make for a good movie, such as zombie hands reaching through a sandstorm, catapulted infected bodies as weapons, or the multitude of savage zombie deaths that filmgoers love. There are also some good twists on zombie mythology, such as pregnant women carrying mutant babies and zombies “breathing” spores when they do not breathe. Then there are some parts that could have used further editing, such as numerous chapters ending with characters screaming from “off stage,” sudden shifts in point of view, and some characters being killed quickly while others face a sort of “death row” with no logic beyond wanting to stall the plot. Horde is a case where I wish the author had followed a traditional publishing route. There are some clever ideas here, and some guidance from professionals would have helped to elevate them.