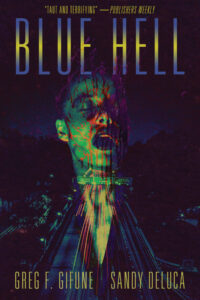 Greg Gifune is a horror writer I have seen much praise for, but whom I never had the pleasure of reading. That was rectified with my opportunity to read and review his recent novel BLUE HELL, a collaboration with author Sandy deLuca, which combined elements of classic horror with nightmarish settings and imagery that will linger long after the story is through.

Mr. Stringer, a previously homeless man, wakes up in a hospital bed claiming the whole world has been in flames. He is nicely corrected that he was struck by a car, and that is all that happened. The next strange incident for Stringer is when a woman named Mrs. Milken offers him the opportunity for transition. This transition involves his being moved to his own apartment, small and meagerly equipped, where he can live safely. He accepts, but that strange feeling he has inside does not leave—nor do the dreams of being on fire, an occurrence that seems to be happening to the homeless in the area regularly.

Mrs. Milken had also informed Stringer that he was one of lucky few to come to this place and that, like the other lost souls there, he had earned his place.  It is only once he speaks with some other residents and gets a rare glimpse outside of the building that he begins to have other thoughts—a feeling that he might be in hell. Although he is unable to verify this, he sees much around him that tells him he might be in a bad place—like the words scratched into the walls of the communal restroom that read ‘HELP ME.’

Interspersed with the chapters on Stringer and his new existence are other chapters that show him somewhere else, with a group of people he doesn’t know, yet on some sort of life-or-death mission. It becomes difficult to decipher what is real and what was past experience he had somehow blocked out. He meets a young woman named Rita who he begins an intimate relationship with, but she is not quite sure what this place is either.

Part Two of the novel finds us with a new protagonist who is undergoing similar circumstances to Stringer—a young woman called Carla—who is also greeted by Mrs. Milken following a period of blackout. Part Three introduces us to Marco and Edgar, a young and older man, also in this same place. As Gifune and deLuca state on the back cover, these are the passengers of night. This is Blue Hell. BLUE HELL is not so much a novel as an experience, one that reads like a waking nightmare. I especially like the quotations from the likes of Clive Barker and Nathaniel Hawthorne, which in some way reinforced that we were in the midst of a work dealing with strange horrors never before seen or experienced by any reader.