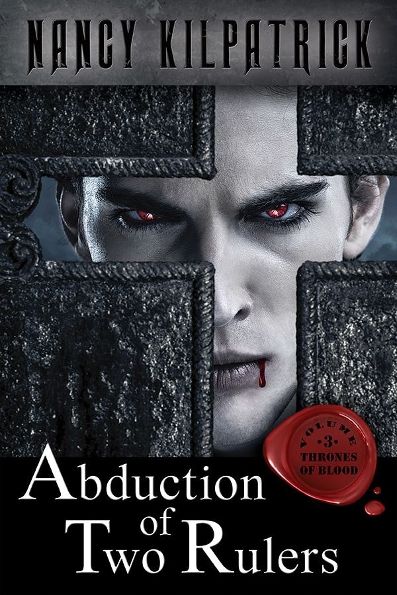 This highly anticipated addition to the Thrones of Blood series opens with a bang (and some fangs) via a very hungry Vampir King, Thanatos, who is held hostage with the Sapiens Queen, Blanka. They are both in a perilous position and must decide to kill or be killed. We were introduced to the leaders of other realms at the end of Book 2, and Abduction of the Two Rulers delves deeply into these new characters by fleshing out their perspectives and the history of other kingdoms. We are still treated to our familiar friends: Moarte, Valada, Belladonna, Serene, Wolfsbane, etc. and the characters from the first two books seamlessly intertwine with the new ones. Abduction of Two Rulers is equally about love and war. I greatly admire how the Thrones of Blood books evolve: Kilpatrick gives enough background that a reader could pick up Book 3 first, but she is never redundant to those of us who have been reading since Book 1.

There are many things that I love about Abduction of Two Rulers, but to keep matters simple, there are three reasons why readers should grab a copy today.  First, Queen Lamia is one of the more disturbing, scary and wonderful villains of recent literature. She is evil, sexy, and mesmerizing, and has unique techniques for causing pain that will make readers squirm. Her torture chamber trumps Hieronymus Bosch’s Last Judgement in terms of implements of cruelty.  A tip of the hat to Kilpatrick, as Lamia is one of my favorite vampire creatures of legend and she has imbibed a new life into that monster. I need more of Lamia!

Second, Queen Blanka and King Thanatos. While I tend to avoid romantic stories, I was drawn to these two. Blanka provides the “fish out of water” perspective as she tries to understand and navigate the world of the Vampir. She is forced to combine her book learning of vampire life with a sudden new reality, and she also struggles to figure out her rank in a nebulous world. Her misunderstandings are often humorous and relatable. Thanatos is a different type of King than we have been treated to before. A former dancer, he is physically formidable, yet he is humble and full of insecurities. While I enjoyed the confident alpha Moarte and the stoic Wolfsbane, Thanatos serves a nice compliment to the other Vampir males.

Third, Kilpatrick’s clever additions to the vampire mythos.  Nancy knows her vampires and has always remained true to the familiar legends. That said, she introduces some nuances in her Thrones of Blood that deepen the fables without straying from them. For example, she describes the extreme thirst that the vampires feel upon waking in a way that is new, yet supportive of what we have always known about the creatures. The most interesting twist was the introduction of a poison that paralyzes the Vampir and causes them to suffer from hallucinations. The Vampir have always been depicted as indestructible, and Kilpatrick plays with this weakness in remarkable ways.

I highly recommend Abduction of the Two Rulers. Avoiding any spoilers, it ends with a potential relationship that I would enjoy seeing play out in Book 4! Fortunately, there is still much of the story to tell!